Premier is our family ministry.

by Lacy Basford, a 6 Diamond Designer from Florida 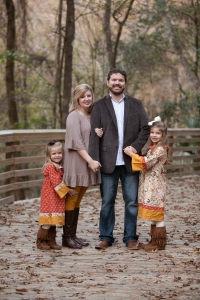 I had only ever dreamed of being a teacher and earned my Master’s degree in education. Then I had two little girls. It’s funny how having kids changes things. After kids, I knew I wanted to be home with them during the early years, but Jonathan and I were buying our first home and were $200 short on our budget. I started Premier to make up the difference in our budget so I could continue staying at home with our two young girls.

One of my very best friends, Charyl Hermann, had become a Premier Designs Jeweler almost exactly one year prior, and she spent that year telling me what Premier was paying for and what an incredible company Premier is. She really just wouldn’t hush and I am so glad she didn’t. That’s why, in September of 2009, I became a Premier Jeweler without ever having been to a show or seeing the jewelry in person!

I was so fearful that I wouldn’t be able to sell $400 worth of jewelry each month to make the $200 we needed to make our budget… who would buy that much jewelry? But sure enough, for the first year of our business, Premier was meeting our monthly $200 need and more. I learned to make bookings my priority.

Finding, practicing, and owning a solid booking activity, plus learning how to overcome objections, was the key to success for me. I learned not to worry about retail…retail always comes.

Exactly one year after I became a Jeweler, the company Jonathan worked for went bankrupt and closed down. It was an unexpected blow. However, it didn’t surprise God. The month prior to this unexpected news, I held 10 Jewelry Shows—more than double what I normally did. The money I made from those shows paid all of our bills that first month Jonathan received no paycheck.

For another 10 months, God miraculously provided our every need, mainly through Premier, while Jonathan searched for a job. 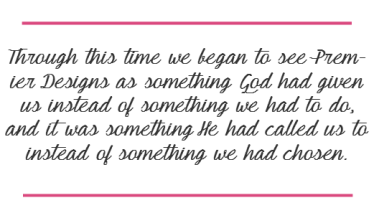 Through Jonathan’s year of unemployment, our marriage took a hard hit. God grabbed a hold of us at a marriage retreat and clearly showed us that He was the one closing every door in Jonathan’s job search, and the one He was leaving open was Premier. We became obedient to what God wanted and recommitted to putting God in the center of our marriage. Later that year, we earned a week-long cruise from Premier for free. That cruise was a celebration for us. We had come through an extremely difficult time in our marriage. It marked the celebration of God’s DESIGN for our lives!

We have seen God use Premier Designs to provide financially, draw people to Jesus, provide friendships, strengthen marriages, and so much more. Premier is a business, but it is also a ministry. Being a small part of what God is doing in the lives of people is now why we do Premier. For us, it is our family ministry. We didn’t choose it, but we are so glad God chose it for us.

7 thoughts on “We Are Premier – Lacy Basford”

We love your feedback; leave a reply. Cancel reply

WHAT ARE YOU LOOKING FOR?